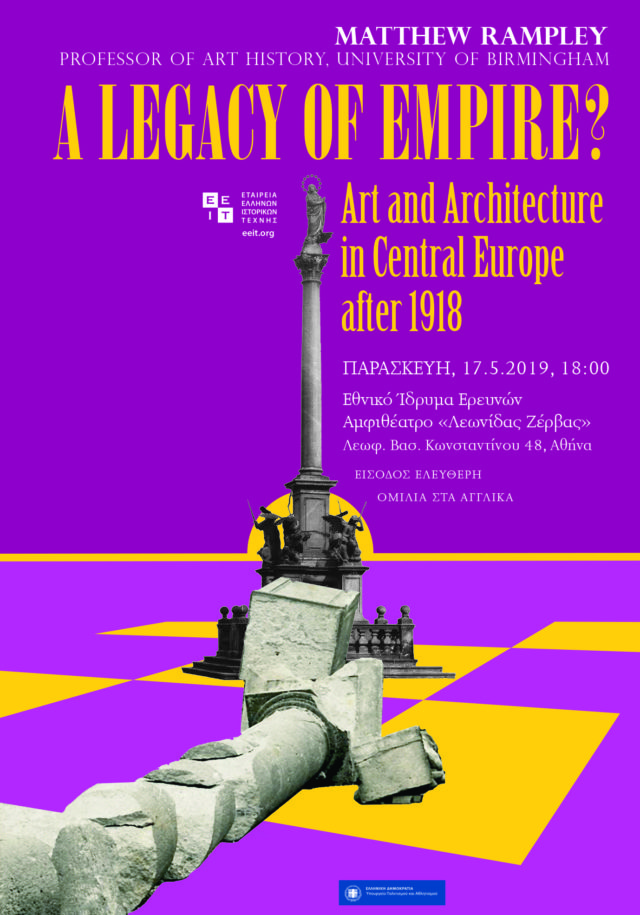 The Association of Greek Art Historians organized a lecture by Matthew Rampley on Friday, May 17, 2019 at the ”Leonidas Zervas” amphitheatre of the National Hellenic Research Foundation, 48 Vassileos Constantinou Avenue, Athens, Greece.

In his talk A Legacy of Empire? Art and Architecture in Central Europe after 1918, Rampley discussed the following topics:

How does one encourage the members of a multi-national society to be its loyal citizens? This question, which has obvious contemporary relevance, was a major concern in Austria-Hungary from the mid-nineteenth century onwards. As the ideology of nationalism became increasingly powerful in the 1800s, the legitimacy of the multi-cultural Habsburg Empire increasingly came to be questioned. National difference became more important than being the member of a cosmopolitan community. This lecture considers the importance of these broad issues for the visual arts, arguing that they became a site where competing ideas of social and political identity were presented. This affected not only the kinds of works of art and architecture that were created, but also the decisions about what to put on display in public museums and galleries, and the ways in which the past was understood. The lecture therefore asks: How were art and architecture shaped by the broader cultural and national politics of the late Habsburg Empire? In addition, in what ways did the Empire use its powers of patronage and support for the arts to promote its own agendas?
In 1918, the Habsburg Empire collapsed; new states were created out its ruins, and Austria and Hungary were refashioned as diminished, traumatised republics. The lecture thus also asks: how the new political situation affect the visual arts in the years immediately after the First World War?

Matthew Rampley is leading the European Research Grant project Continuity / Rupture: Art and Architecture in Central Europe 1918-1939 at Masaryk University in Brno in the Czech Republic. He was previously chair of art history at the University of Birmingham. His principal research interests focus on central European art and visual culture of the late nineteenth and twentieth centuries, and on art theory and criticism. His main publications are: Nietzsche, Aesthetics and Modernity (2000); The Remembrance of Things Past: on Aby M. Warburg (2000); The Vienna School of Art History (2013); The Seductions of Darwin (2017). His latest books: An Empire Exhibited: Art Galleries and Museums of Austria-Hungary  and Liberalism and Design Reform in the Habsburg Empire will be appearing in 2020.

The lecture was open to the public and was part of the Series of Lectures by Distinguished Art Historians organized by EEIT. It was delivered in English.